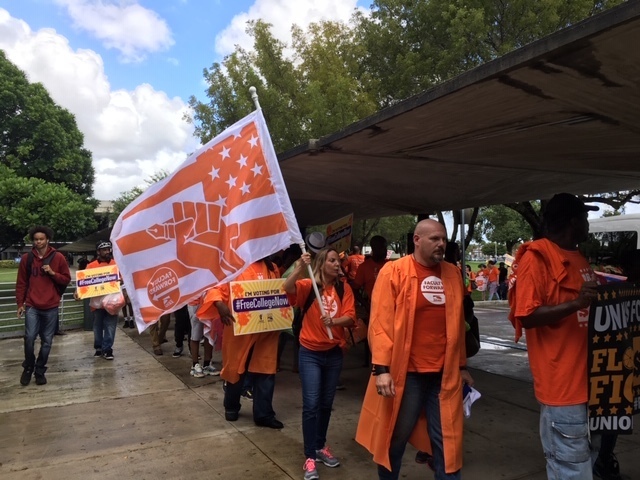 Florida’s higher education campaign continues to sizzle as adjunct professors at Miami Dade College -- the largest college in the country -- voted to form their union with SEIU FPSU. The group is now the largest single-school adjunct collective bargaining unit in the nation.

“Today, I’m proud to be united with my colleagues in winning the biggest adjunct professor union with Faculty Forward,” said Stacey Wadle, an adjunct professor of business and communications at Miami Dade College. “As politicians chip away at our young people’s futures, we’re uniting to fight back. It’s clear to anyone watching the tide of professor organizing sweeping the state that something big is happening here.”

The organizing campaign gained national attention when the school’s administration launched an aggressive anti-union campaign while pushing their employees to sign up their children for Medicaid or other government sponsored healthcare programs. Bloomberg broke the news that the school’s vice provost wrote in an email to faculty, “does your child have insurance? ...Don’t let insurance premiums stand in the way of your child’s health. With Florida KidCare, your child may qualify for free or low-cost coverage.”

“Our fight for a union at Miami Dade College isn’t just about our wages or the lack of respect we face everyday; it’s about standing up as educators at the largest college in the nation and saying enough is enough,” said Ximena Barrientos, an adjunct professor of earth sciences at Miami Dade College. “We’re tired of watching our students go to food banks because tuition keeps rising. I’m tired of worrying about bill collectors when I should be worried about lesson plans. By standing up with one voice, we can demand the investment we need for our students and colleagues throughout Florida.”

Read more in the Miami Herald, Miami New Times, and Inside Higher Ed